Originally published as a "Kindle single" in 2011, Sam Harris' Lying was republished in a revised and expanded format in 2013, but it remains more of an essay than a book. The entirety of the book weighs in at 108 pages, but the main content takes up only about a third of that. The remaining two thirds consist of a transcript of a conversation between Harris and professor Ronald A. Howard, whom Harris credits as the inspiration for the book, and an FAQ based on feedback received since the original publication. These latter two parts make a worthwhile addendum to the original essay, but they are by no means indispensable: the centerpiece here is Harris' analysis of the act of lying and all the ways in which it can lead to bad outcomes.

In Lying, Harris attempts to make the case that dishonesty is almost always unethical, and that simply by being truthful, one can avoid "endless forms of suffering and embarrassment." This might seem like a fairly obvious statement, but Harris explicitly includes (and, in fact, primarily focuses on) "white lies"—those small lies we tell not for our own benefit, but, we think, to spare others from hurt feelings or unpalatable truths. Though white lies are often told by good people for what they believe to be are good reasons, Harris argues that the cost of these lies, in the long term, outweighs their benefit: 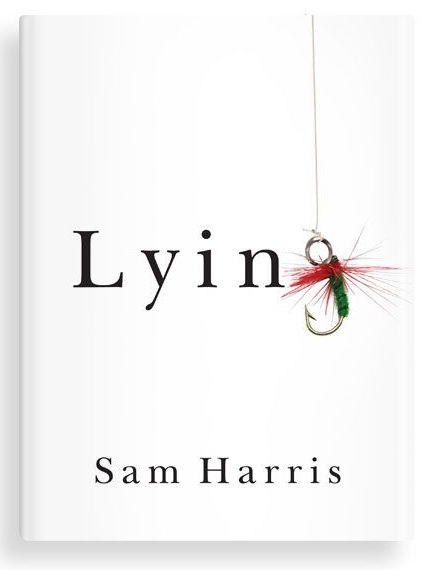 What could be wrong with truly "white" lies? First, they are still lies. And in telling them, we incur all the problems of being less than straightforward in our dealings with other people. Sincerity, authenticity, integrity, mutual understanding—these and other sources of moral wealth are destroyed the moment we deliberately misrepresent our beliefs, whether or not our lies are ever discovered.

And although we imagine that we tell certain lies out of compassion for others, it is rarely difficult to spot the damage we do in the process. By lying, we deny our friends access to reality—and their resulting ignorance often harms them in ways we did not anticipate. Our friends may act on our falsehoods, or fail to solve problems that could have been solved only on the basis of good information. Rather often, to lie is to infringe on the freedom of those we care about.

When we presume to lie for the benefit of others, we have decided that we are the best judges of how much they should understand about their own lives—about how they appear, their reputation, or their prospects in the world. This is an extraordinary stance to adopt toward other human beings, and it requires justification. Unless someone is suicidal or otherwise on the brink, deciding how much he should know about himself seems the quintessence of arrogance. What attitude could be more disrespectful of those we care about?

Harris provides a number of examples of how white lies can backfire: by dishonestly telling a friend that he doesn't need to lose weight, you might be denying him the motivation he needs to live a healthier lifestyle. By hiding a serious medical diagnosis from loved ones, you foreshorten their opportunity to come to terms with it, and miss a chance to deepen your relationship. By providing false encouragement about a friend's career prospects, you lead her to waste time and energy that might be spent more productively with a change of course.

Although he does make a case for honesty in situations in which many of us would be tempted to lie, Harris does not seem to be advocating for "Radical Honesty". Radical Honesty, as I understand it, requires not only complete honesty, but also complete transparency, and what some might call a stunning lack of tact. Harris, by contrast, allows that it may sometimes be necessary to "[hold] one's tongue, or [steer] a conversation toward topics of relative safety" in order to maintain civility. He also sees no conflict in principle between being honest and keeping secrets: "If someone asks how much money you have in your bank account, you are under no ethical obligation to tell him. The truth could well be 'I'd rather not say.'"

Harris' position is certainly easier to embrace than "Radical Honesty," which I imagine could easily ruin your life if you don't have extremely understanding friends and family. That said, it's still not easy, in practice, to always be honest. It is hard to tell people things that you know they won't want to hear. It takes willpower and emotional energy to always make the virtuous choice rather than looking for the easy way out. And there are edge cases, rare but by no means impossible, where the ethical value of honesty really does seem questionable. For instance, consider this example from Harris' conversation with professor Howard:

Harris: ... Other examples of this [ethical difficulty] have come to me from people who are caring for parents with dementia. Your mother wakes up every morning wondering where your father is, but your father has been dead for fifteen years. Every time you explain this, your mother has to relive the bereavement process all over again, only to wake up the next morning looking for her husband. Let's assume that when you lie, saying something like "Oh, he's away on a business trip," your mother very quickly forgets about your father's absence and her grief doesn't get reactivated.

Howard: That's an interesting one. I would be tempted to say something like "Well, he's where he usually is at this time of day." The fact that he's buried in the ground somewhere doesn't add anything to this person's knowledge of what's going on. And as you pointed out, you would just be putting her through pain all over again. As you stated the case, why would you want to do that?

This answer doesn't seem entirely satisfactory. First of all, what if you were asked for a more specific answer than the one Howard gave? In that case, I think you really would be forced to lie, and from a consequentialist point of view that really does seem like the right thing to do given the situation; Howard almost admits as much. And even if that's not the case, Howard's answer still seems deliberately designed to be deceptive, even if it is not strictly false. He goes on to call this "'skillful truth-telling' as opposed to 'evasion,'" but that seems like a euphemism to me.

This exemplifies the problem I have with Lying. I'm in complete agreement with Harris that lying is almost never the right choice, for both ethical and practical reasons. But believing that in principle is much different from adhering to it in practice. How does we resist the almost reflexive impulse to tell people only what we think they want to hear? Where do we draw the line between reasonably concealing of private information and dishonestly withholding facts that people have a right to know? And how can we train ourselves to reliably decide when situations really do warrant "skillful truth-telling" if not outright deception? These questions are not always easy to answer, and I don't think that Lying does enough to address them.

If you find yourself to really be in need of convincing that white lies can be harmful and should generally not be ethically permissible, then Lying is probably a worthwhile read. But if you already accept that proposition, this book is hard to recommend.