I don't watch a whole lot of TV. In fact, I don't even have cable. The only shows I end up watching, therefore, are those I'm introduced to or I read about. Mr. Robot is the latest such show; I read David Auerbach's piece on it and was intrigued. In Auerbach's words:

Real misfits—disturbing, unappealing, unlovable misfits—make for poor Hollywood protagonists. It takes some faith to inject a genuinely alienating hero into a film or TV show. But ever since the broader world of tech has gained a whiff of cool over the past decade or so, Hollywood's portrayals of hackers, programmers, and other screen-strapped geeks have tended to sugarcoat the frequently unvarnished and even unappealing aspects of a culture that prides itself on not caring about the mainstream. I'm not bemoaning the lack of shy nerds with hearts of gold here, but of awkward and even abrasive characters who talk too loudly, can't follow conversational cues, transgress boundaries obliviously, and harbor conspiracy theories or other unappealing ideas—like a lot of actual hackers out there. We forget that people detest savant types for reasons beyond their smarts, and a lack of social graces is one of them.

Elliot, the protagonist of the new USA Network drama Mr. Robot, comes far closer to this type than an American television show has dared for a while. (Elliot isn't the titular Mr. Robot—that's Christian Slater.) As played by Rami Malek, Elliot doesn't have the charisma of Benedict Cumberbatch's Sherlock or the anti-charisma of Hugh Laurie's Dr. House. Unlike Tony Shalhoub's Adrian Monk, he's not a collection of quivering nerves and endearing eccentricities. These characters—all nerds of one sort or another—are fundamentally capable of functioning in society, and Elliot really isn't. He and the world just don't hook up in the right way. Taking copious drugs in order to function, he carries a vacant and flattened affect, neither making eye contact with anyone nor turning away when they look at him. With his emaciated face and sunken eyes, Malek gives an impression of emptiness, paranoia, and above all disconnection.

This is probably a polarizing description: some people will be immediately interested while others will probably question why anyone would want to watch it. It was very much the former for me, possibly because Auerbach's description of Elliot hits a bit close to home. I watched the first episode and was instantly hooked. The show immediately draws you into its world: a sort of dystopian present, a mirror image of our own reality, but viewed through the eyes of a brilliant, cynical, emotionally troubled young man who struggles not only with an unfeeling universe but also with drug addiction and mental illness.

Atypically for movies and TV, Elliot's mental illness is depicted respectfully and at least somewhat accurately, too. He's not an over-the-top Hollywood psycho, but merely a vulnerable person suffering from paranoia and delusions. And being a software developer, I also really appreciated that the show nails the technology. It's not completely realistic, but that's to be expected; the reality of programming and hacking is that they're slow, analytical processes, often consisting of long stretches of thought punctuated by short bursts of activity. In other words, they're boring to watch, and sometimes to undertake, too. Mr. Robot strips that away, but it keeps the interesting aspects intact without insulting the audience's intelligence with impossible technology, meaningless invented jargon, or awful 3D GUIs.

The overarching social commentary in Mr. Robot is also captivating. It's not especially original, nor remarkably insightful, but it's executed marvelously; because everything is presented from Elliot's point of view, it's very hard not to take an empathetic attitude to his perception. This is also true of the mood of specific scenes: the intimacy between the viewer and Elliot is an extremely effective tool for creating suspense, or sadness, or whatever else the show wants you to feel, because you're so invested in him.

It helps that the show's production quality is excellent as well. The cinematography is excellent, the music is superb and perfectly matched to each scene, and the acting is stellar—not only from star Rami Malek, but also from his co-stars, who include Christian Slater, Portia Doubleday, Carly Chaikin, and others. Not all of them have the name recognition of Slater, but every one is excellent in his or her role, which is far more important. (Besides, it's nice to see some new faces.)

But unfortunately, it's not all good news. The first seven or so episodes of the series are all-around excellent, but after that... well, first a warning: major spoilers begin below here. Scroll down to continue reading. 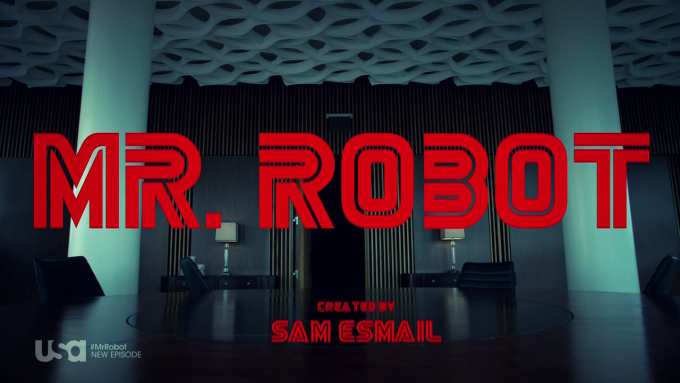 ...after that, shit gets crazy. Literally.

From the beginning of the series, Elliot is clearly an unreliable narrator. The presentation of the show is not "objective" in the sense that we see the majority of it through the filter of Elliot's biases, but beyond that, the extent of his mental illness isn't really clear. Is he just socially anxious and a bit paranoi,d or is he actually suffering from hallucinations? What else is he hiding from us? Up through episode seven, we don't really know.

But then, in episode eight, Elliot has a complete psychotic break. It is revealed that Mr. Robot never actually existed, at least not as we know him. Rather, he is a dissociated personality of Elliot's, and not only that, his appearance and behavior are projected from repressed memories of Elliot's dead father. I'm not a psychologist, but this is implausible to me to the extent that it makes suspension of disbelief becomes very difficult.

I wrote above that the show's portrayal of Elliot's mental illness was respectful and realistic in contrast to what Hollywood typically does. That was what I thought until episode eight. Post-episode eight, Elliot is the archetype of ridiculous Hollywood insanity. His dissociative identity disorder is straight out of Fight Club (and so, for that matter, are certain elements of Mr. Robot's plot); I'm not sure how many times that specific trope has been used, but it already feels tired and overdone.

There's a scene in episode ten where Elliot gets in a fight with Mr. Robot, and the camera cuts between what he's hallucinating and what's really happening; in the latter, we see him choking himself up against a wall while people look on in shock and confusion. The scene is just ridiculous—I honestly wasn't sure whether it was supposed to be sad, or dramatic, or comical.

To be fair, although I wasn't impressed with the over-the-top portrayl of Elliot's hallucinations, the show does a good job of making it plausible that Mr. Robot never actually existed separately from Elliot. If you watch closely, you notice that other characters never address Elliot and Mr. Robot at the same time, and when the two of them are talking, nobody else ever takes notice. (Some viewers caught on to this from the beginning and thus saw the twist coming. I didn't, so I had to go back and double-check.) And although the ability that Elliot apparently develops to summon Mr. Robot at will is also absurd, I'm glad that Slater's character won't be disappearing. He does an excellent job in the role, and he's a big part of what makes the show so as good as it is.

Some scenes, though, require serious mental gymnastics once we realize that Mr. Robot isn't real. For instance, one wonders why Darlene was so slow to recognize Elliot's psychosis given how differently he must have been acting from day to day. And then there are the scenes in episode five, in which Mr. Robot, Romero, and Mobley all talk to Elliot via radio as he infiltrates Steel Mountain. They don't all talk at once, and the other two don't directly acknowledge Mr. Robot's presence, so presumably we're to believe that Elliot is also just imagining Mr. Robot talking to him in this case. But this feels like a cop out. If almost everything we're being shown is just Elliot's wild hallucinations—even when Elliot isn't in the scene and cannot possibly know what is occuring—it feels like the rug has been pulled out from under us and there's no basis on which to trust the authenticity of anything. That makes the entire plot feel hollow.

As much as I was disappointed by the direction Mr. Robot took towards the end of the first season, it's still a very good show. All of the positive things I wrote before the cut still apply. And, critically, it's managing to advance the plot while maintaing suspense. I never watched Lost, but from everything I've heard it eventually became a disastrous mess of questions piled upon questions, all unanswered, ultimately leaving viewers feeling as if they'd been jerked around by writers who were flying by the seats of their pants. Mr. Robot doesn't do that. The destruction of Evil Corp's records that the whole season was building up to did happen, and in the next season we'll see the reprecussions of that. But there are still many other threads waiting to be explored—will we see more of Fernando Vera? What is Evil Corp's motive in hiring Angela? What happened to Wellick? Why does Whiterose know Price?

I'm looking forward to season two. I just hope it's a bit more grounded—more like the early episodes of season one than the latter half. I'm worried about whether or not Sam Esmail can pull that off given bizarre history he now has to accomodate, but I enjoyed the show enough that I'll give him the benefit of the doubt. If nothing else, the first few episodes of Mr. Robot will always stand out to me as an instant classic.

And we've finally got a successful TV show written by someone who understands computers as more than voodoo boxes capable of literal magic if you can type gibberish fast enough (perhaps by enlisting another pair of hands on the same keyboard). I'll take my victories where I can get them.